It has been the normal that we only had just one trek per month but this one is an exemption. This climb will be the last pre-climb for The Club’s first Major Climb in Mt Talinis. The purpose of the climb is to test and push the limits of the participants after enduring the arduous Lanaya Trek.

On August 15-16, 2015 the club had its “funny one more climb” themed climb. This time, it was with the Club members, guests and our guide for Talinis Expedition Neo and Tope together with the members of Tribu HUBO.

We were told that we had to bring with us loads approximately the same as the loads were about to carry in Mount Talinis Expedition. Woahhhh, it’s a dry run… seriously!

Meetup place was at Guadalupe Church. Few of the guests were there as early as 7:30AM but some were late and the last one arrived at 9:30AM.

We then hurried to our jump off at barangay Napo by motorcycle taxis (Habal2x) since we’re late on our itinerary. The trek has commenced with a short prayer at around 10AM.

The trail was a steep ascent. Our hearts were pumping that much that we had several stops even before reaching the first tower to catch our breaths.

The struggles continued. We trekked, trekked up, up to those steeply inclined trail. With our loads, we found ourselves were really exhausted and that our body’s really want to give up already. But good thing we had really a fun set of trekkers that supports each other. No matter how tired we were, a little peep talk and funny jokes can keep us alive and endure till the end. 🙂

When we’re about to reach the 3rd Tower, the heavens cried. Yes, we’re soaked wet by the tears of the Gods above. Wet and wild though!  🙂

The plan was to have our lunch on the 3rd Tower, so despite the heavy rains, we had out lunch then. Thunderstorms continued, we set up tarp but nah, the rain flooded our temporary camp.

We had our sumptuous Chicken joy lunch with free soup, rain flavor. 🙂

Guess, the universe conspired and made the rain stopped right after we had finished our lunch. Perfect isn’t it? That’s the fun part when you’re as one with nature! You won’t know what might happen next or within a blink of an eye. Rather complaining, we need to treat those as just nuisances and not as inconveniences and find ways how to overcome those.

We proceeded with the trek while it still drizzled. After reaching past the fifth tower, the guide had told us that the trail would be much easier. But behold! We got lost due to thick vegetation. We made the right turn early going downhill where the trail has a very loose soil. One mistake and you will find yourself straight down below. 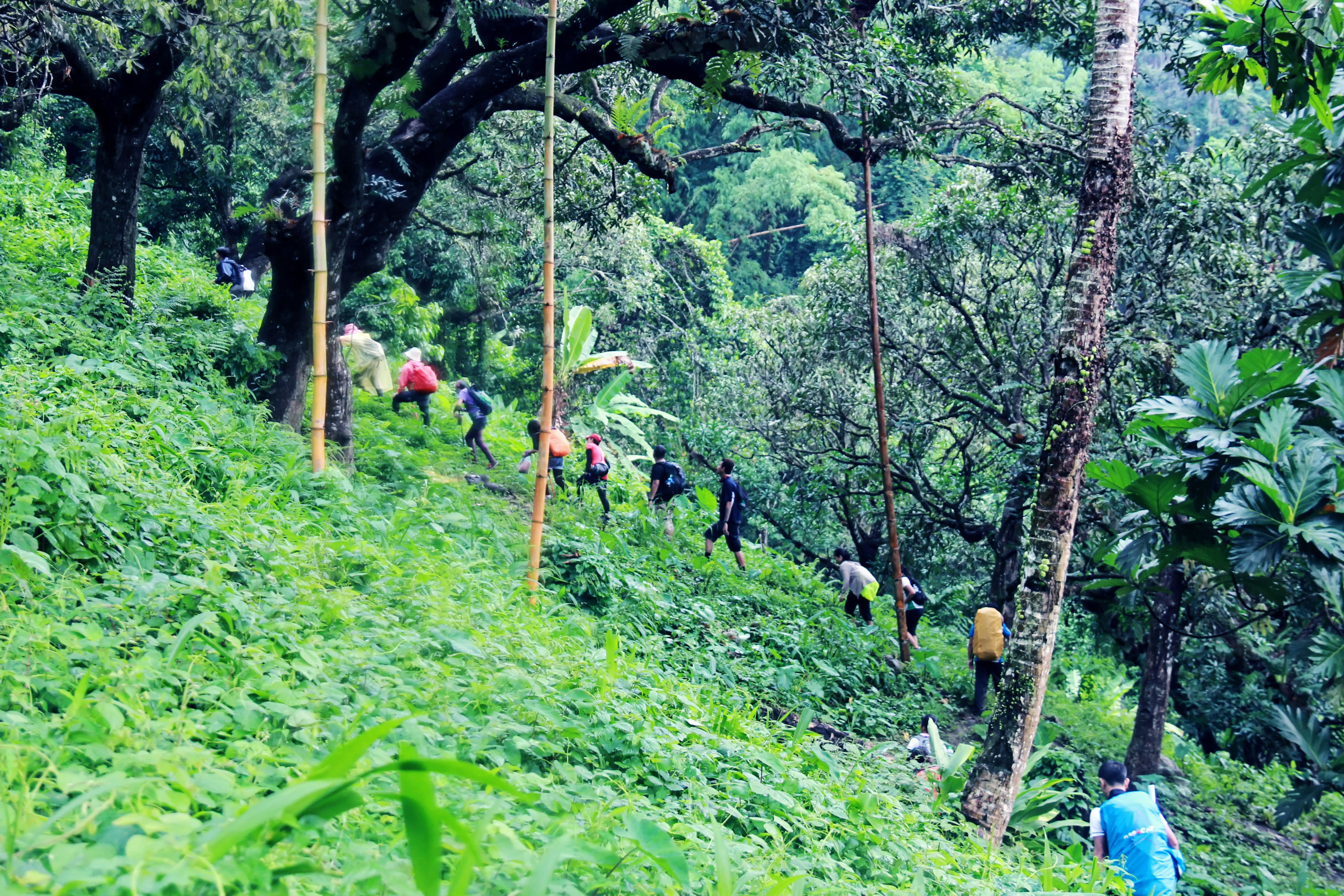 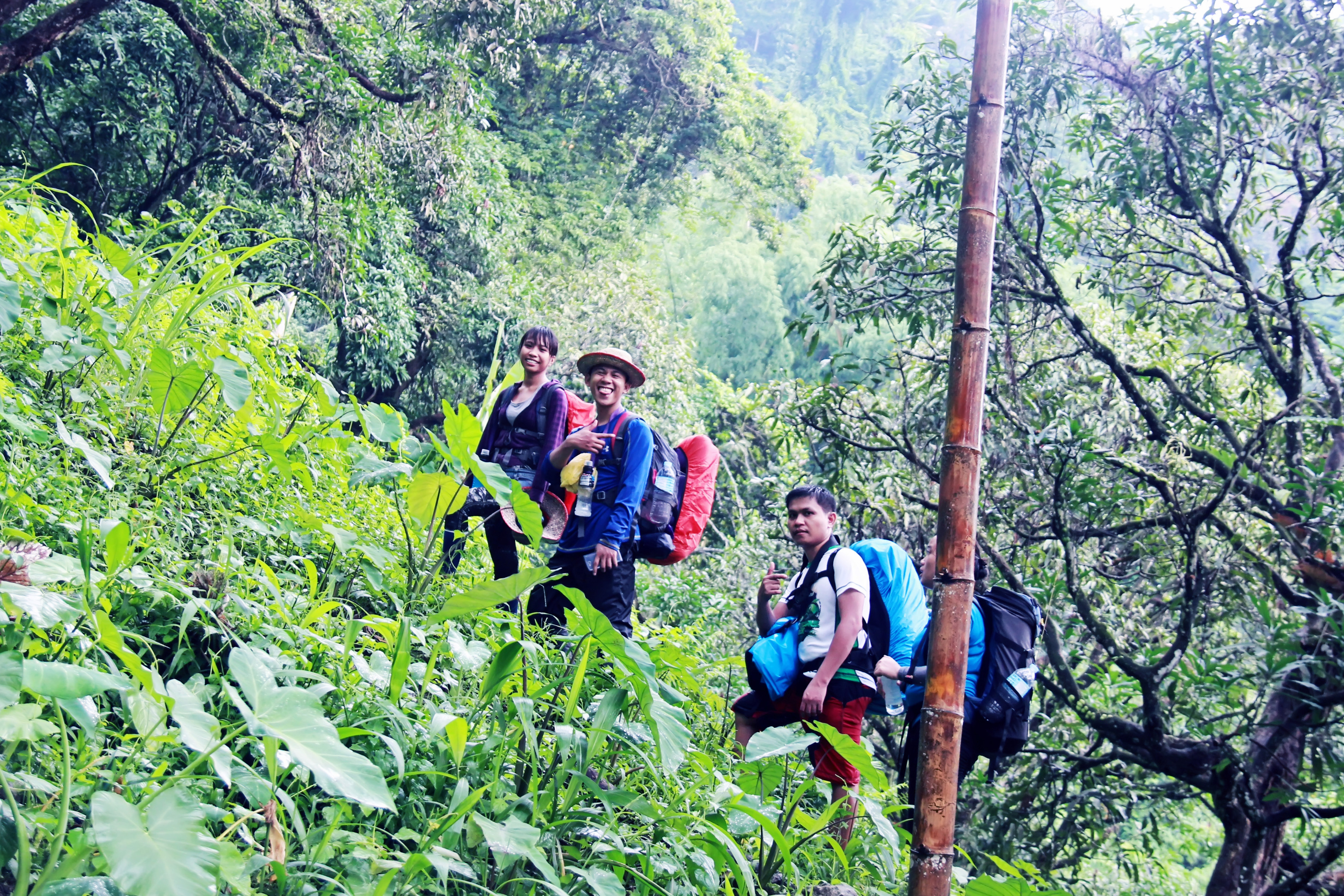 The trail we had followed was for the farmers going to their farm so we had to made adjustments and change our course. We needed to get back on track as were running out of time coz we have day trekkers. We made a very steep climb across the grassy field. The trail was so slippery, and very steep wherein in every step going up you will find your knees almost touching your chin. 😀

After that struggle, we found our way and were back at the right trail.

The trail after that lost moments, was a rolling minor ascent and descent but still under thick vegetation.

We thought that it was the last lost moment for us but we had another dose of it. The trail was not passable anymore and was not visible due to very thick vegetation so we had to find another way passing through a local’s house.

We had a last doze of the steep trail amidst a not so heavily forested area until we reached the branched trail from Mount Babag.

Everyone was really exhausted, wet, and tired of carrying the heavy loads. But upon hearing from our guide that the peak was few more minutes away from the branch trail, everyone was very excited and willing to push the limits and had the dire need to reach the peak. If teleport was an option, we all did. 🙂

Bocaue peak is just small and could only accommodate few tents. We had no problem with it as half of us were just on day trek. We arrived at the peak at almost 4PM. We had enjoyed the 360-degree view of the surrounding mountain range as well the city view. After picture taking and reaping the fruit of that arduous journey, 11 overnight campers decided to pitch the tents and the day trekkers were on their way going down to Bonbon via the Padidit Trail.

While preparing our dinner, our guides decided to buy some drinks while we were just enjoying each other’s company. It was the first night camp that we had no officers in our midst, I was the lone one from my usual trek buddies L . Despite all that, I had realized that going out from your comfort zone sometimes won’t hurt. It was the moment that I realized that I can make someone laugh with my corny jokes. hahaha. Everyone had the share of making everybody laugh. We had a really fun time together to the point that our stomachs got hurt as if we’re doing a hundred curl ups.

After dinner, we had our socials inside my tent. We did the usual socials routine, introducing ourselves and talking other stuffs. The most unforgettable status that was coined was SAD (Single Available Desirable). We played Monopoly while drinking Emperador, wherein they bullied me as I am the one who’s not really familiar with the game. Well, next time I will beat of all them, that I surely promise.  🙂

Due to bitterness that I was a loser… I changed the D of the SAD status meaning to “Desperate” and “Deal Breaker”. But we really had a fun night though were few were wasted, few didn’t even want to leave inside my tent and just want to sleep there. HAHAHA. Daaaah and “body heat” expressions were very popular also. 🙂

We had our breakfast, break camp and then proceeded to Bonbon via Padidit trail. It was indeed a Padidit (slide) trail as most of us had slipped on the trail even if we had ropes for the trekkers to hold while going down. The rain the previous day had added the challenge as it made the trail more slippery and the soil more loose.

Upon going down, right after the padidit trail, the heavens were about to cry again and voila! It pours when it rains. HAHAHHA Everyone has padidit moments even if we’re no longer in the Padidit trail. But we just embraced it and played like a child under the rain, running on a very muddy and slippery trail, throwing silly jokes and few peep talks. 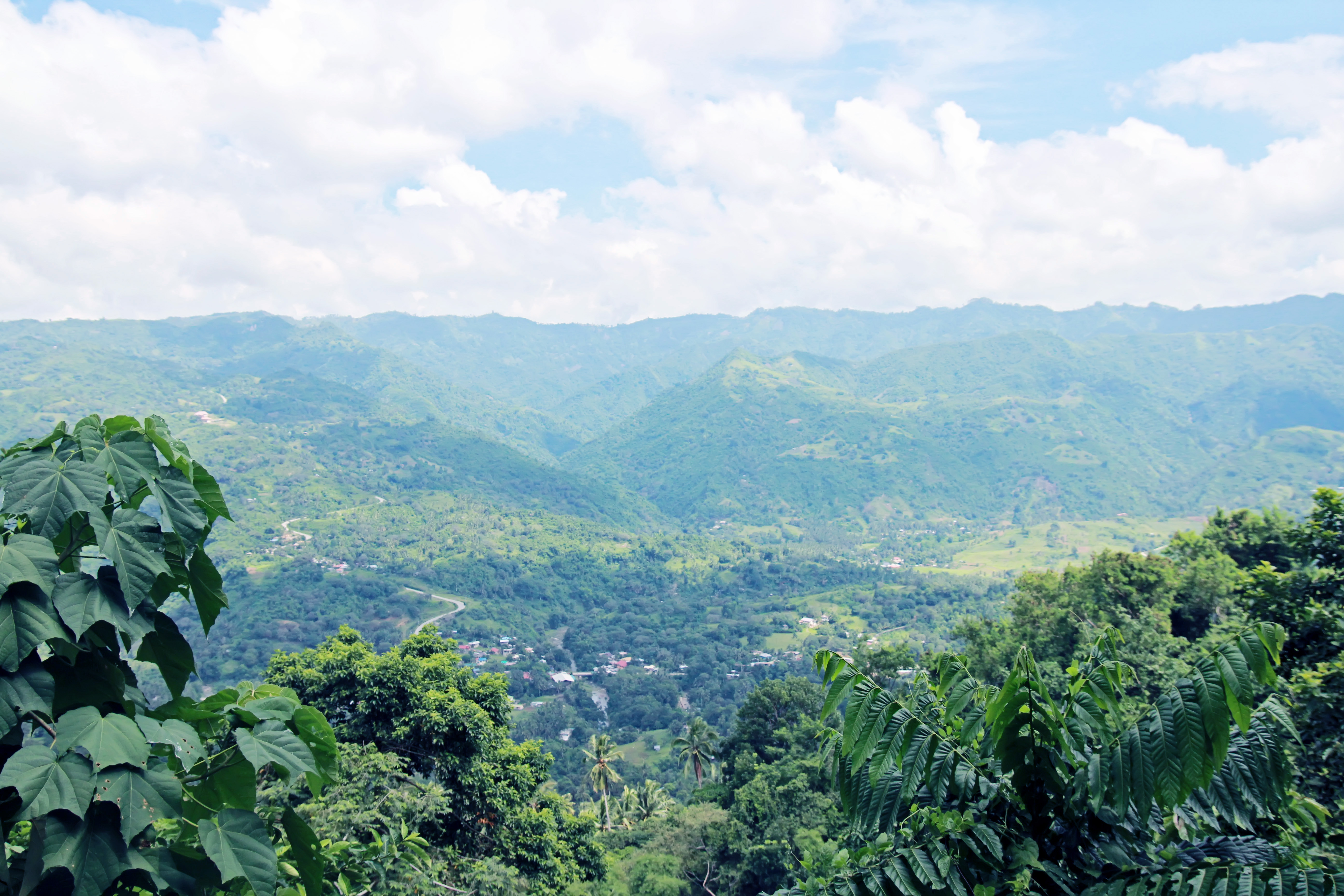 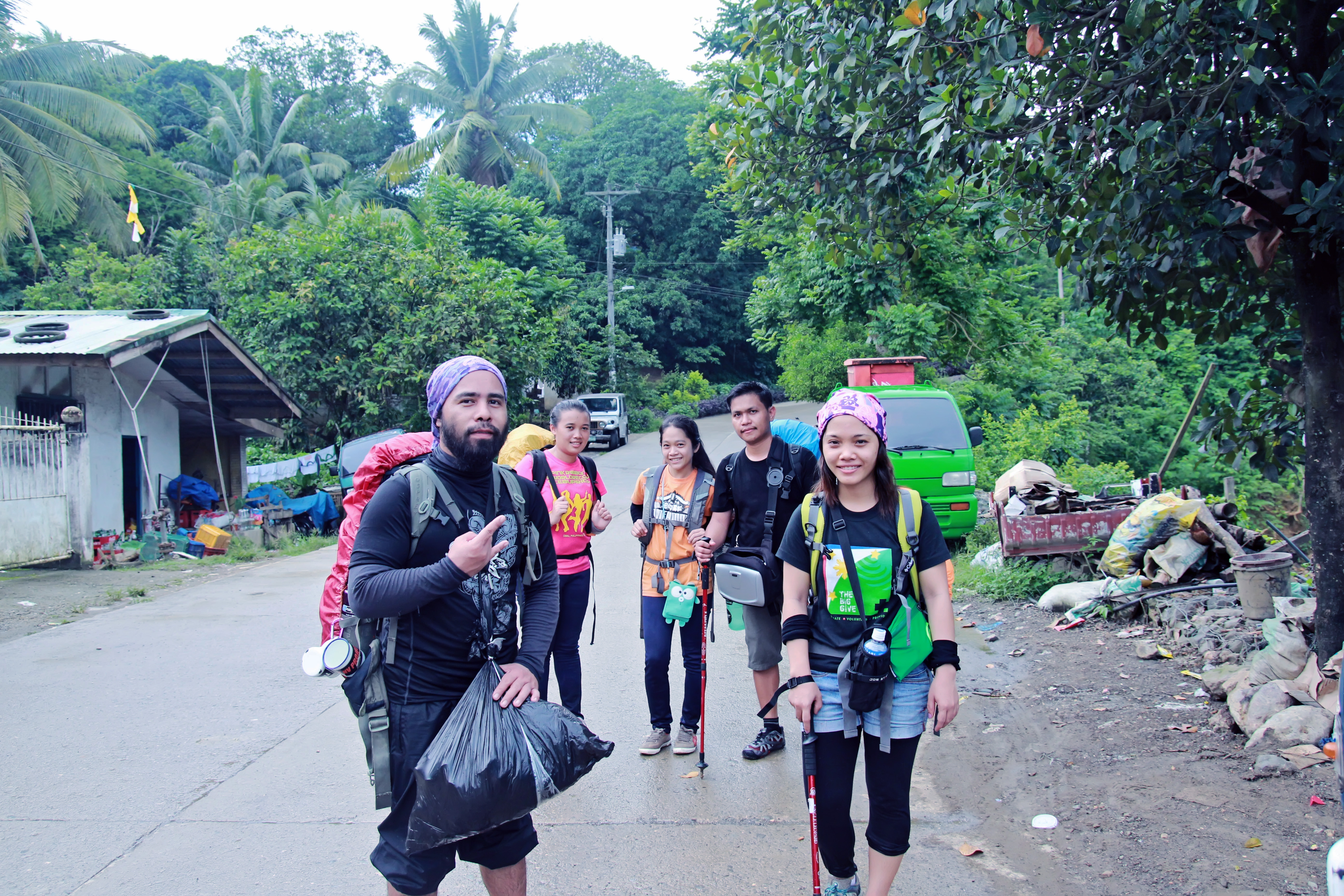 Before lunch time, we arrived at Bonbon where we rode a jeepney going back to JY.