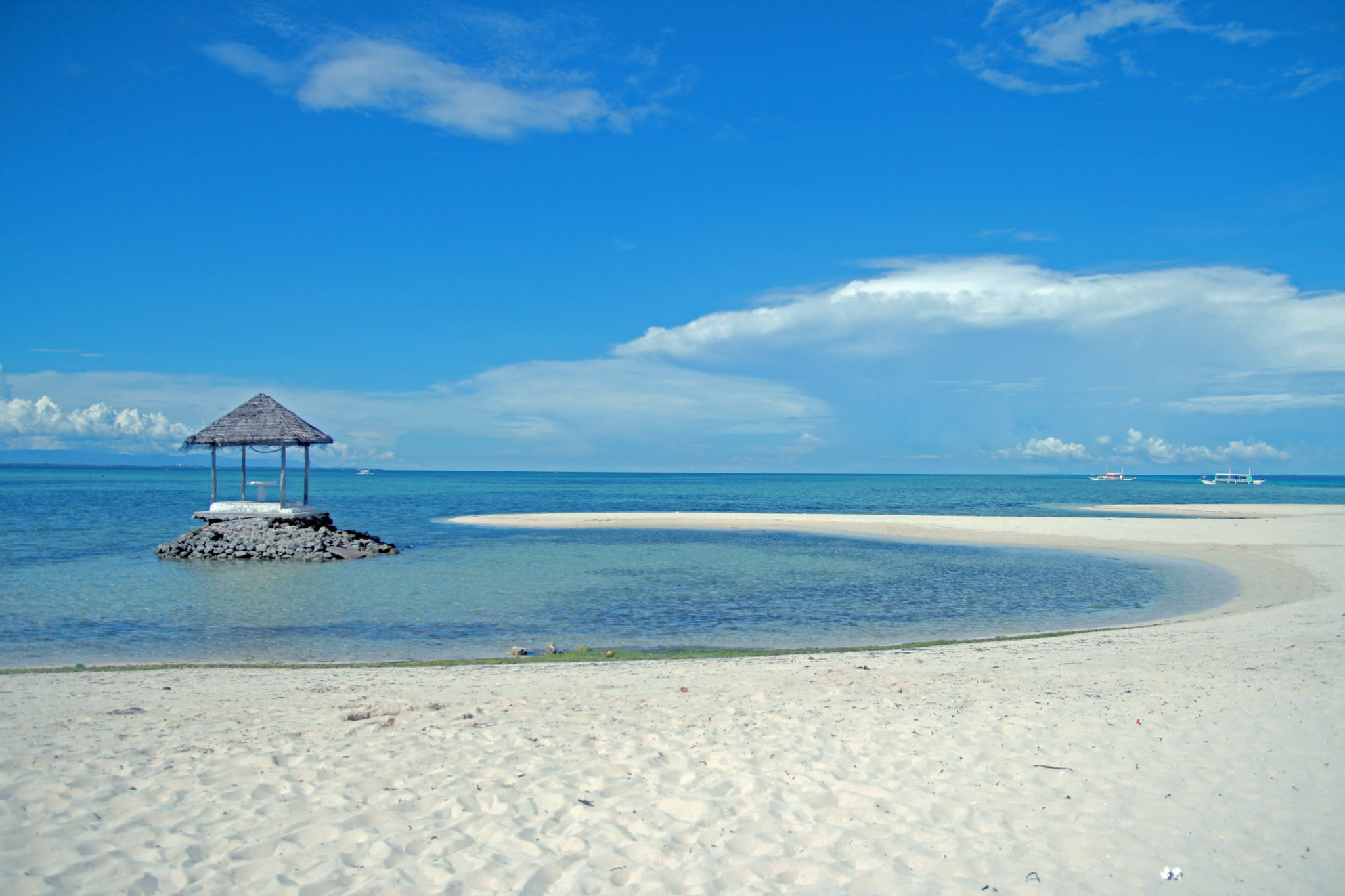 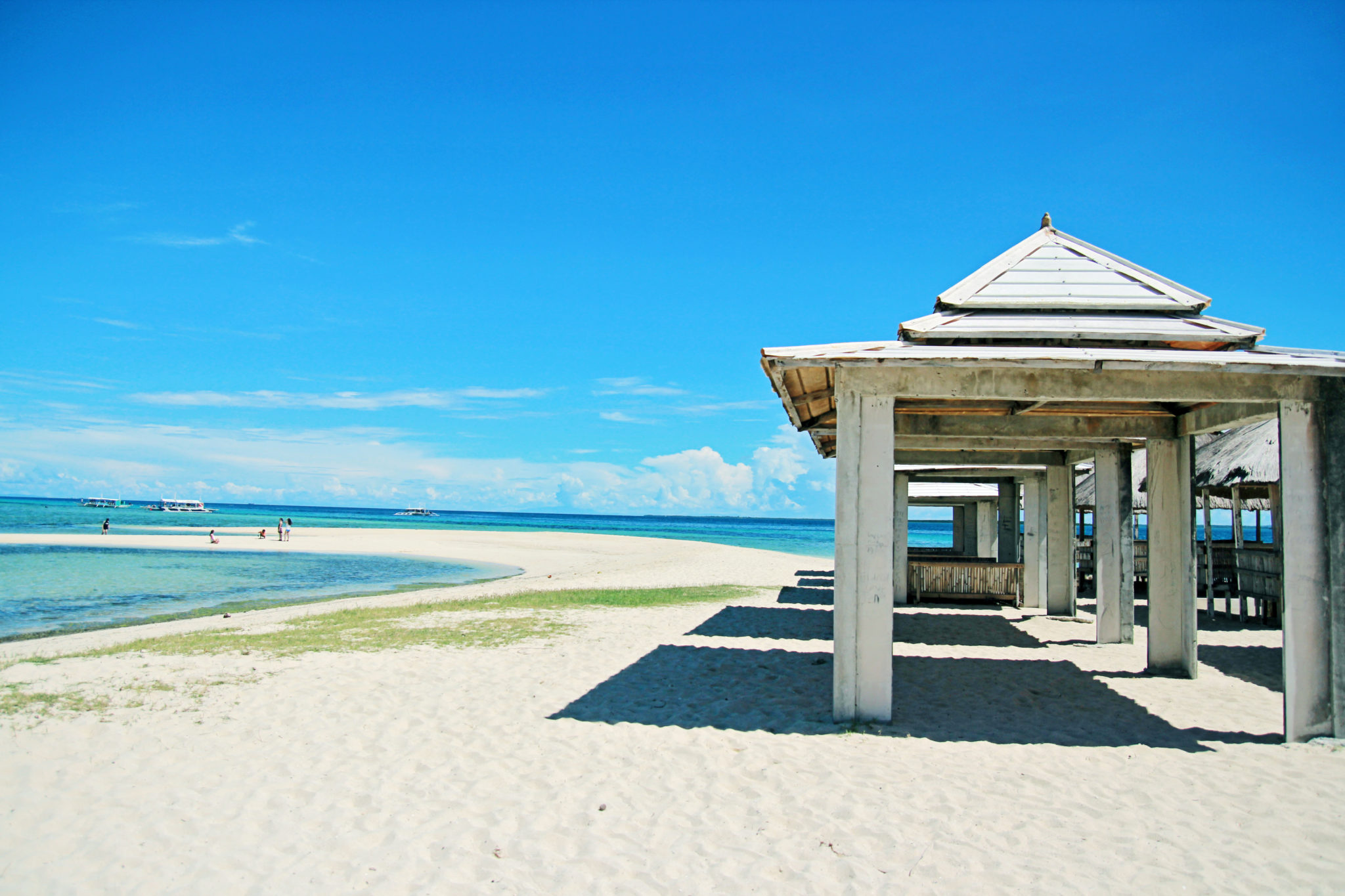 Philippines is a name truncated from “Philippine islands” which is derived from King Philip II of Spain in the 16th century. Philippines is an archipelago consisting of 7,107 islands. Due to this topographical nature of the country, countless sea –related leisure and adventure activities were common. Sea sports are really fad, ranging from snorkeling, wake boarding, surf boarding, parasailing, canoeing, kayaking, dragon boat racing, fin swimming, free-diving, cave and deep diving. Other underwater recreational activities are also common like underwater photography and videography. With that said, exploring these scenic archipelago is also a favorite getaway activity for the sea adventurers and beach lovers.

The Queen City of the South (Cebu) is no exception to that. In fact, Cebu offers a lot of these activities, though not all but most of it. The most common is Island hopping as recreational sea activity. Island hopping is the crossing of an ocean or body of water by series of shorter journeys between islands. There are a handful of islands nearby Cebu that are good destinations for island hopping. One is the Pandanon Island.

Pandanon Island is a beautiful island with a long winding sandbar that changes with the tide. The island is part of the province of Bohol, Central Visayas. This island lies between Cebu and Bohol and sometime in the past this island is politically part of Cebu. It can be reached by around an hour of pump boat ride from Mactan, Cebu. But because Pandanon Island is one of the farther destinations, tour agencies sometimes omit this island in some island hopping itineraries making it less popular than the others like Nalusuan, Hilutungan, Olango and Caohagan.

To those who want to have a secluded place, a more serene, a quieter getaway, Pandanon Island can be the safe haven. It is truly a piece of Paradise just laying amidst the blue waters waiting for anyone to come and devour its grandness.

Like other white islands in the Philippines, relaxing, sunbathing and swimming are the top activities that can be done in Pandanon Island. Its main feature is the long stretch white sand bar where other activities can be done like beach volleyball. If you’re going to do beach volleyball, just bring your own ball.

The Journey to Pandanon Island:

Going to Pandanon Island is easy but could be challenging to those who have sea sickness or motion sickness. The jaunt is just around 60-80 minutes from Mactan Island. 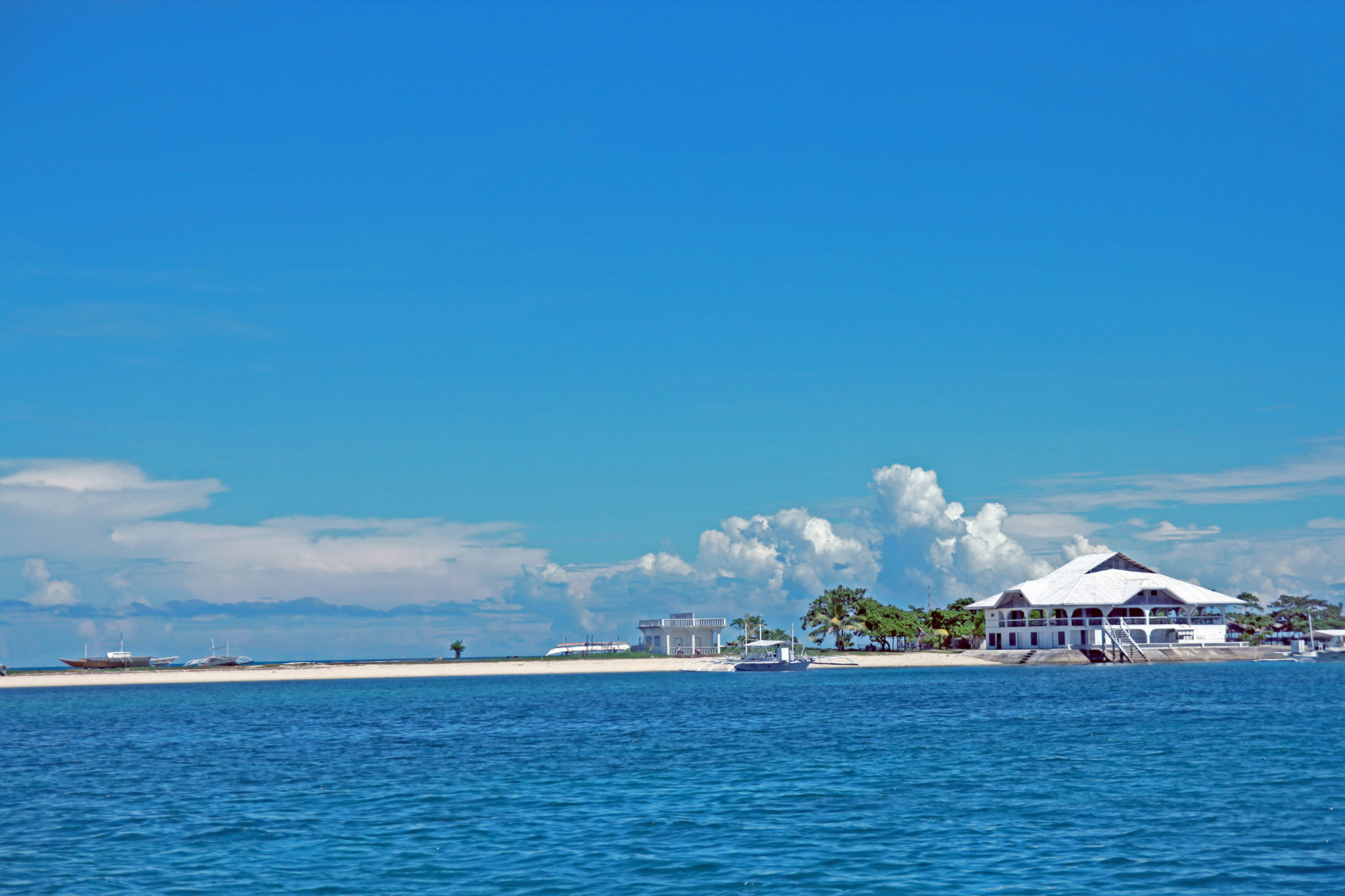 After few minutes of sailing on the blue waters, you won’t see anything but the shorelines of Mactan Island and then just the horizon. Few more minutes and you will notice a structure that looked like a big house on a deserted island. That vision marks that the island is near. The house seems so out-of-place that when you draw nearer to the island, it looks like a haunted house on the beach front. What an eerie vibe isn’t it? 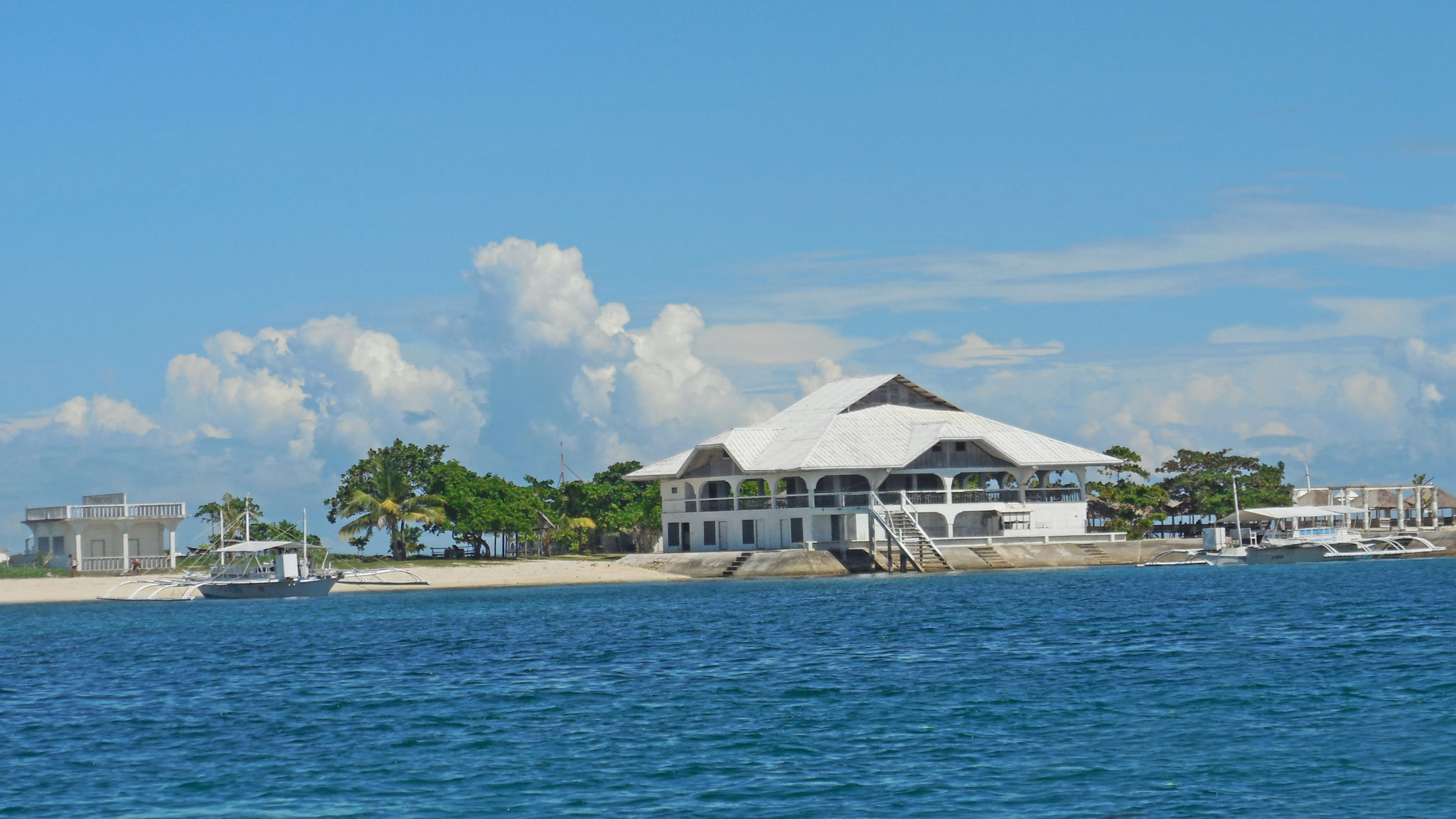 As we approached the island, the white columns probably from the ruins of an old structure in the island catches my attention. It stood out aside from the big house. As we move closer to the shore, the long strip of white creamy sand slowly bare before our naked eyes, pulling us out from the dreamland into reality.

Due to the shallow waters, our boat was not able to reach the beach of Pandanon Island. We had to dabble our way into the dry sand. Like a carefree child we excitedly rush to the shore splashing our way in like sailors who had never seen sand for a very long time. Doing all these stuffs like a kid made that eerie vibe went away in an instant! 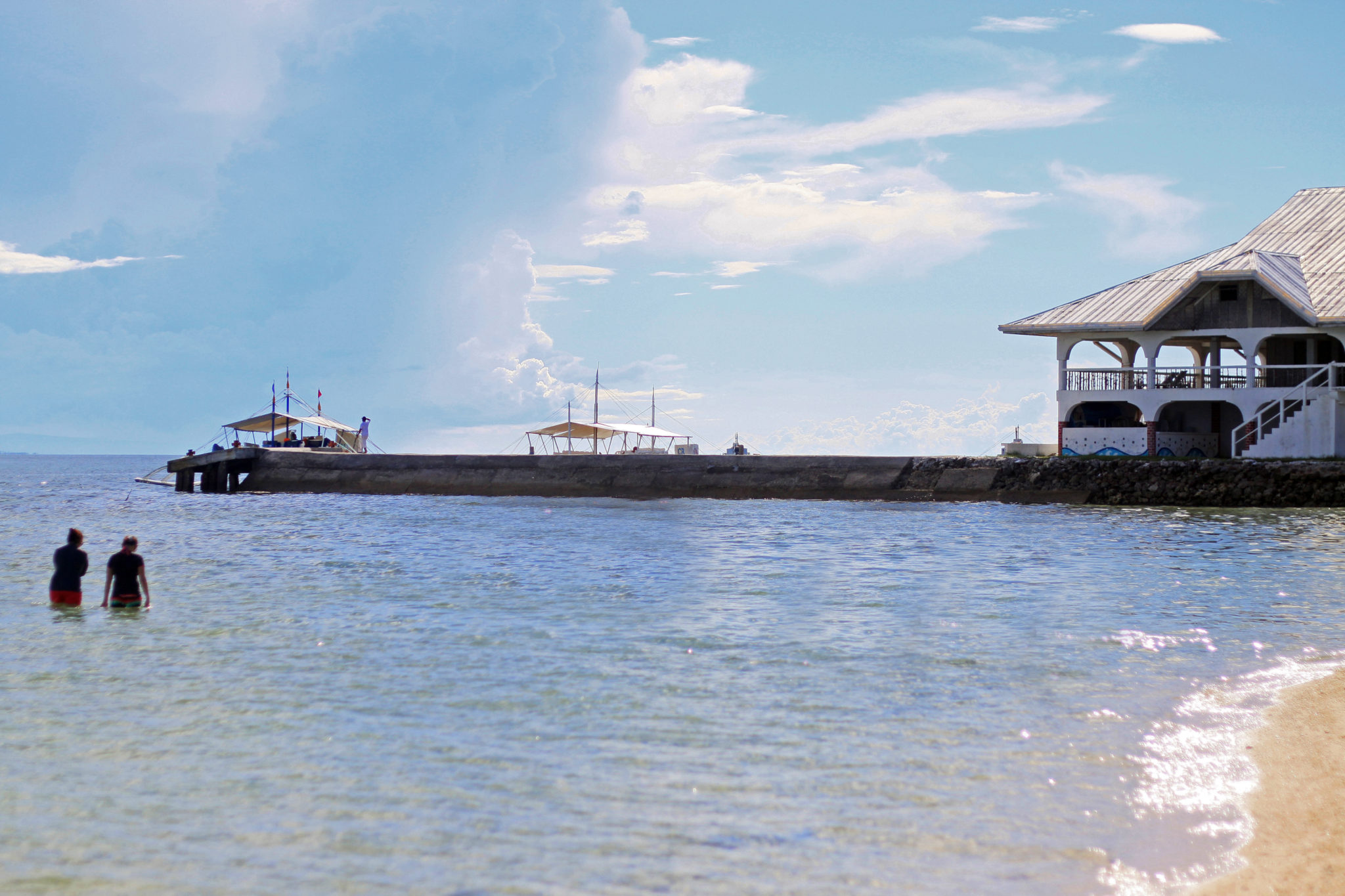 The sand in Pandanon Island is creamy white but not that fine. It has some parts where it is gravely. There is an entrance fee of P150.00 per pax. There are open cottages for rent ranging from P250.00. Due to less number of visitors, Pandanon Island is a conducive place for team bonding, barkada getaways or family gathering. 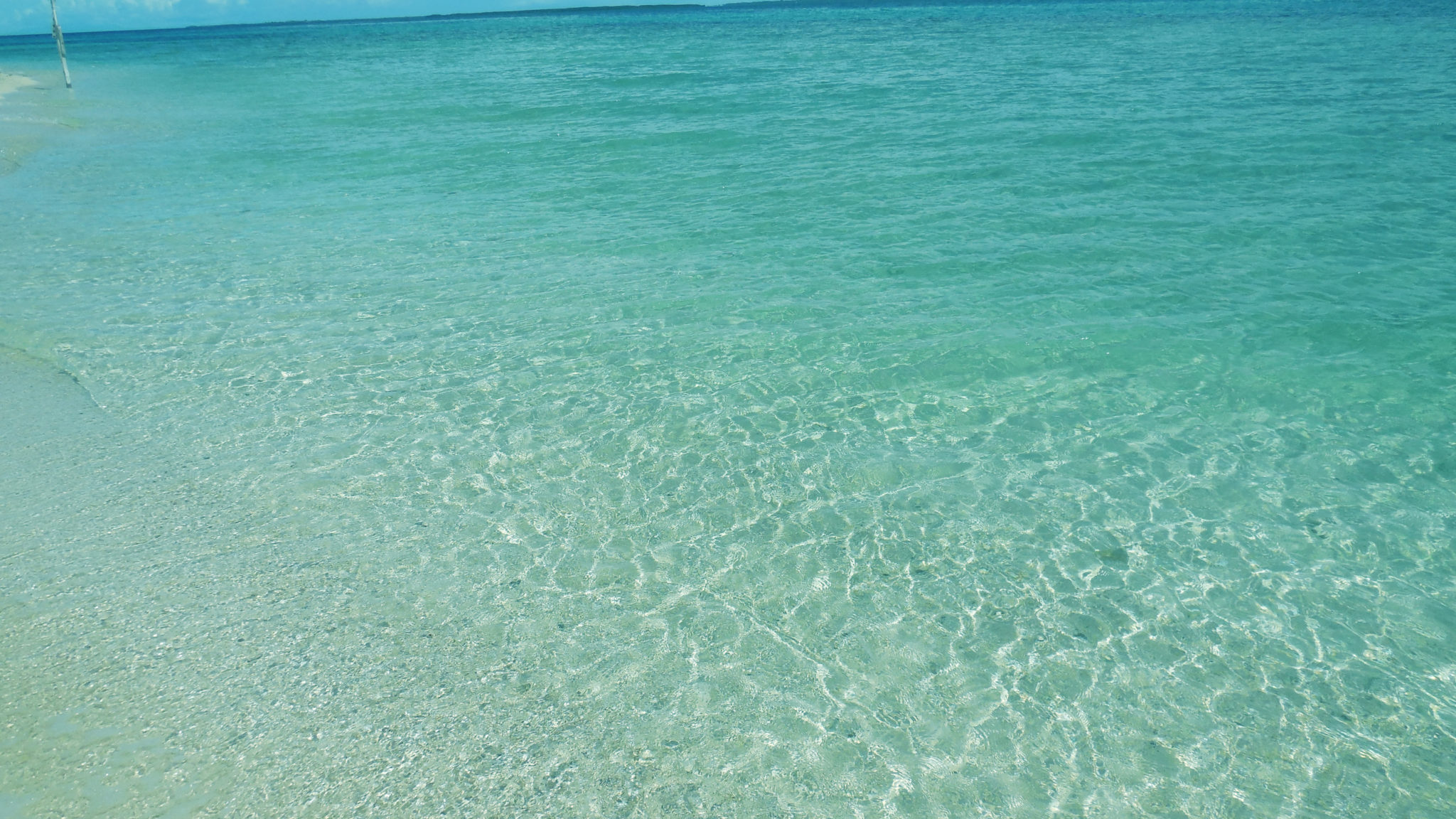 The water is clear and so inviting that you can’t resist your inner self to have a quick dip despite the fiery heat of the sun. The island is not really a good site for snorkeling but you can hire some jet skis but the price is a bit steep. But if your target is just for relaxation and tranquility, then this island will do your bidding.

There is another small Island nearby with around a couple thousand residents. With its land mass, it is a bit populous but not that populous like in the slam areas. On the beach there is a small chapel. This chapel is painted in white and kind of cute but just too little. But this could be a perfect setting for a bit of church wedding and beach wedding in one.

Another highlight of the island is its sandbar. The sand bar is really a good spot to relax and make few splashes while lying and rolling under those cold waves as it creeps steadily towards your body. The sea is buzzing with its dormant strength, gently drenching the sand. 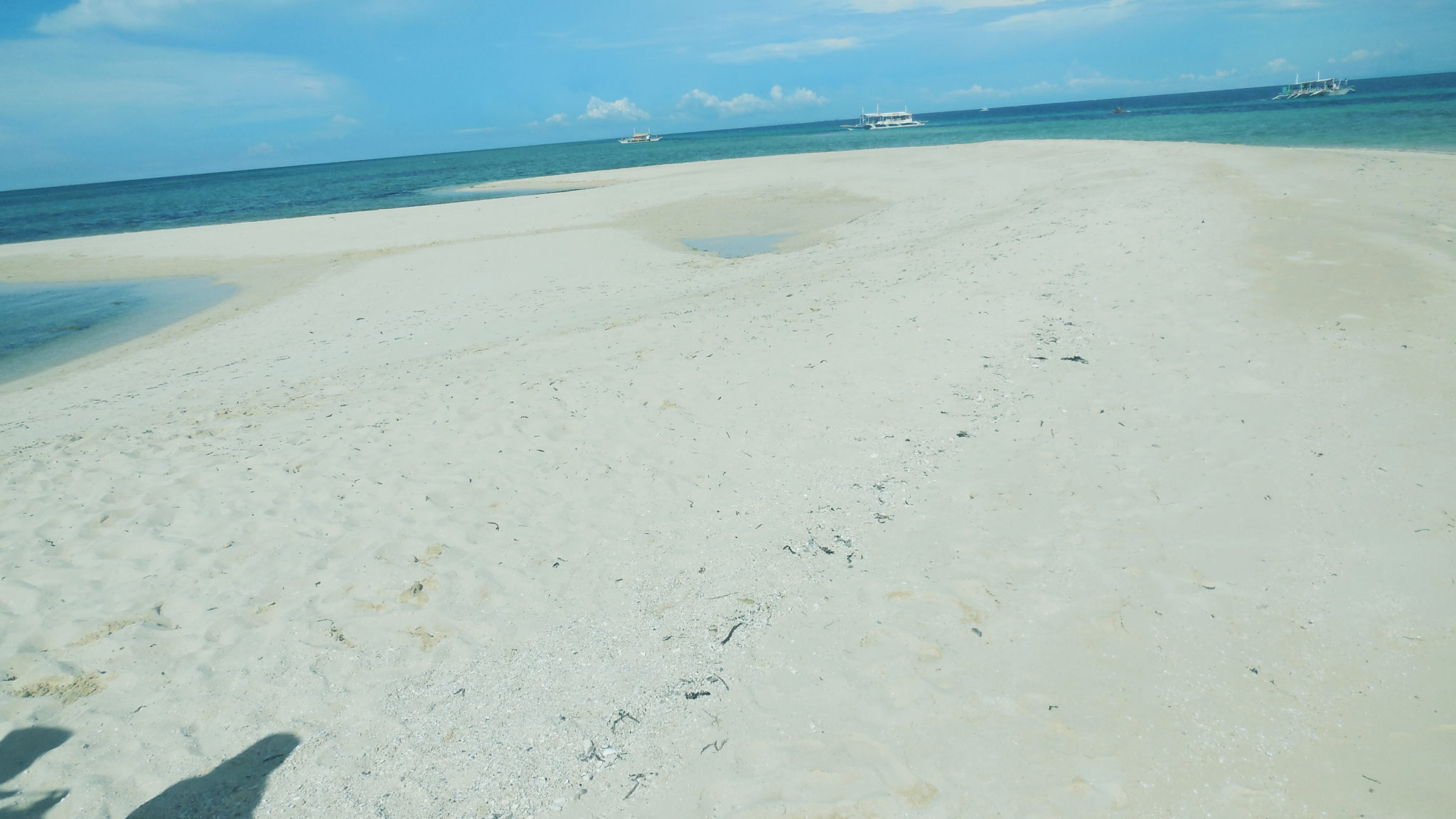 On the sand bar, it felt like we were walking on a carpet of candy floss, such was its softness. Looking around the secluded beach, we didn’t see any of the normal sights; tourists tanning themselves, tacky stands or chattering vendors. The horizon seemed to be stitched with a silver line where the blues streaked out to the place where sea and sky melt into each other and was lost from sight. Only then, we realized that we were standing in the gateway of paradise. The siren call of the sea was inexplicably soothing, the wave music is so welcoming. It is like you are being wrapped in comforting cellophane of warm music and soft light. 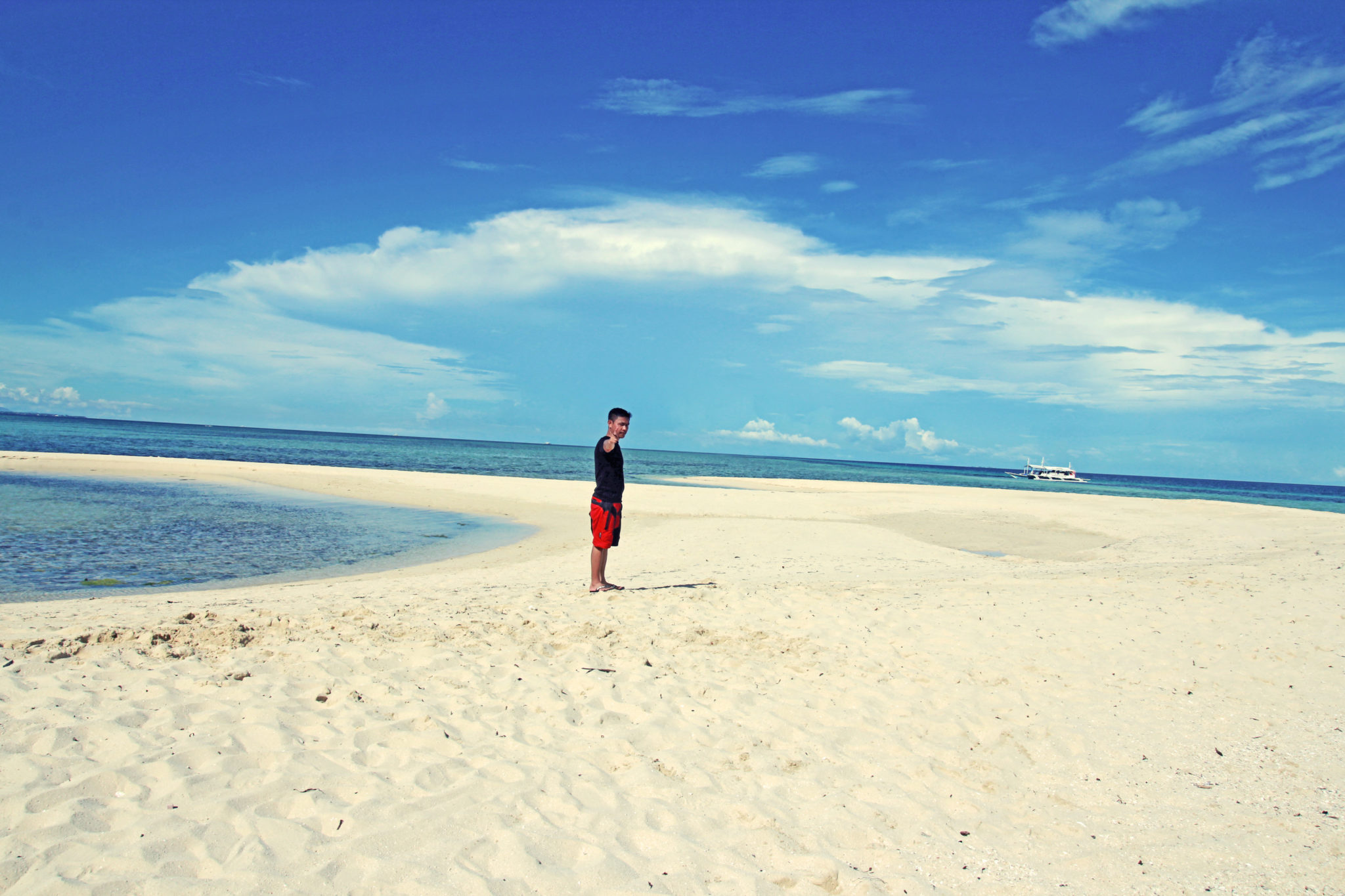 As the sun scorched our bodies to a crisp, the superb sand swept around in a scythe of beach, hemmed in by towering dunes. There were few visitors at that time that is why only occasional tourist walked past us. 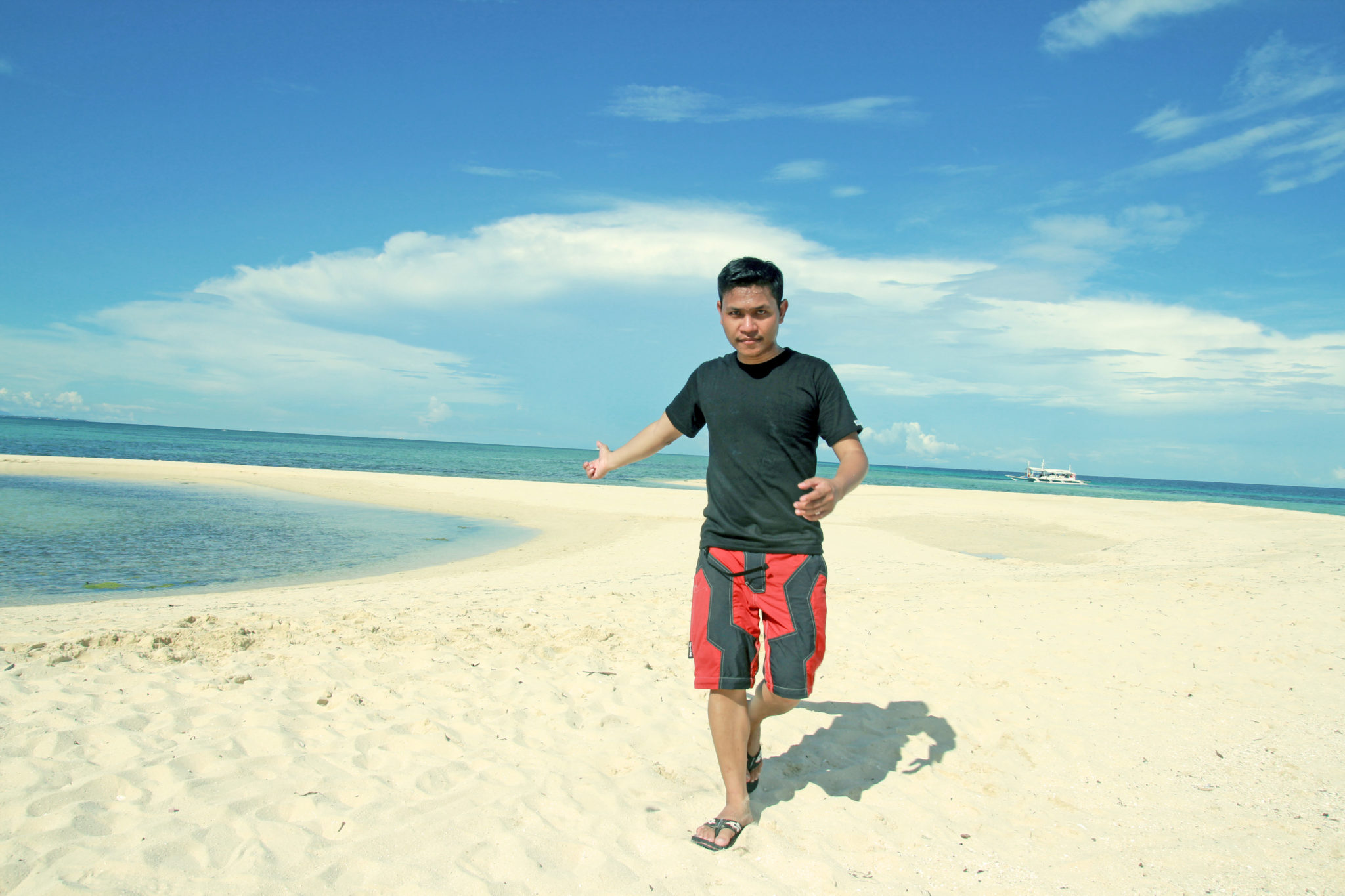 Our serenity had been interrupted by the setting sun that laminated us with its warmth. We decided to make our way home. Our footprints in the sand followed us all the way home. Heavens hideaway in this piece of paradise is a transcendental experience and I resolve to do it again someday. Till we meet again Pandanon Island! 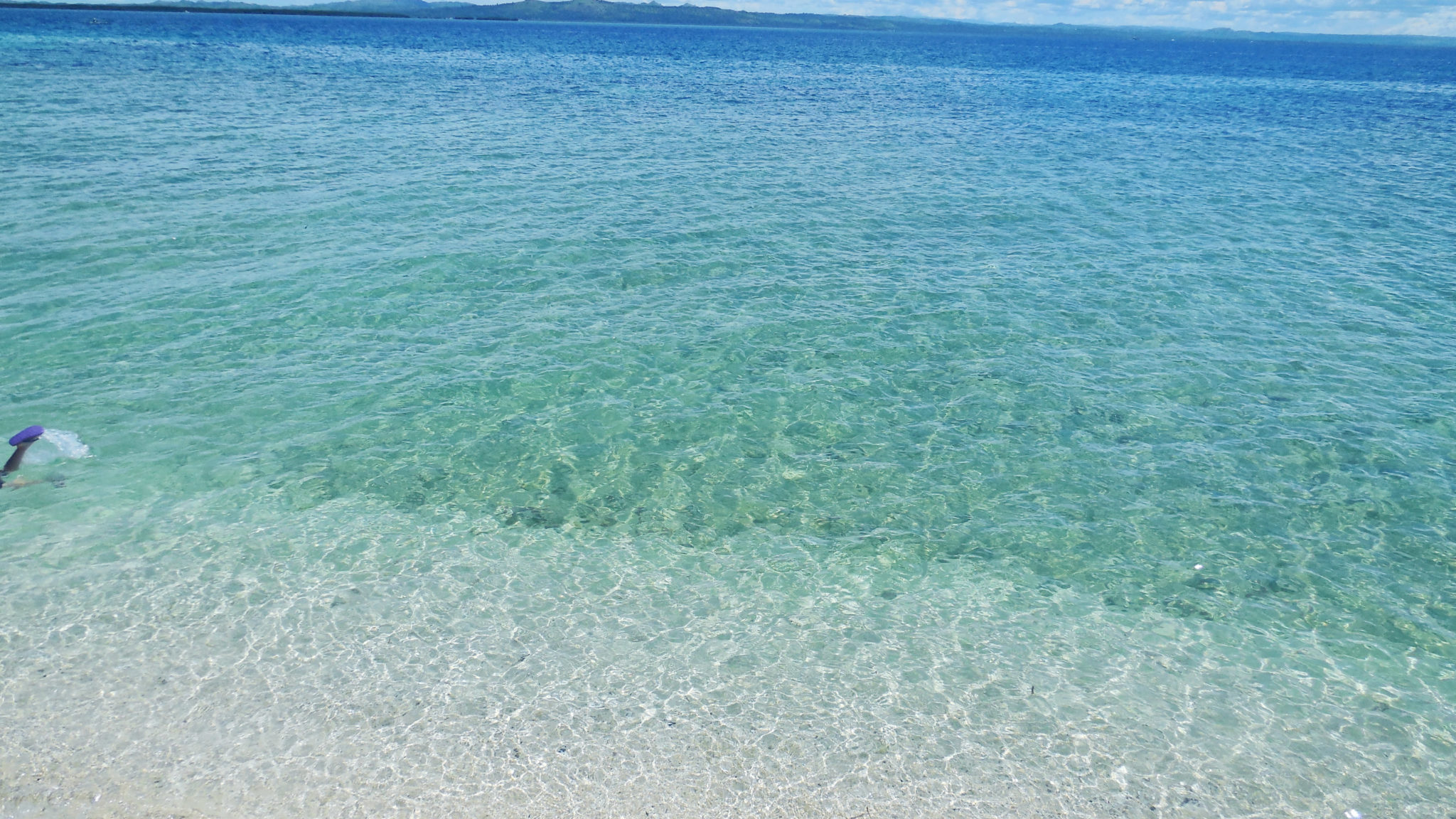 Have you been to Pandanon Island? How was your experience? If not, would you tag along when I do the trip once again someday? Let me know your thoughts in the comments section below.

12 thoughts on “Pandanon Island: A Piece of Paradise”