It has been my 3rd time climbing Mount Naupa in the city of Naga Cebu. My first time was a night trek with two of my good friends Analyn and Eddu. The second time was with the club where I am the President. It was my first month of my leadership bringing around 40 trekkers with me last January this year.

This time, we planned to just have a camp out in Mount Naupa as our year-end climb for the club. That is because the month of December would be an outreach program and the club might just choose a venue that doesn’t involve trekking at all.

Last November 19-20, around 40 campers visited the Mount Naupa again, almost the same number as last January. The trek was divided into two, afternoon trekkers and night trekkers. For the afternoon trekkers, there were just nine of us including WanderingFeetPH. Four of us were campers and the five went home past 6PM.

While waiting, we had these crazy moments within the group. To read more about our experiences, you may read on WanderingfeetPH’s and foureyedlaagan’s stories. 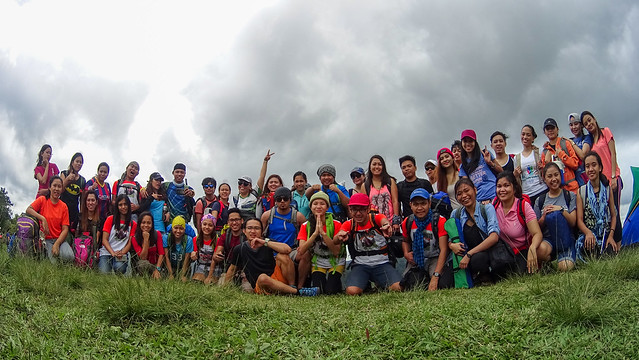 To have a sneak peak of the happenings on our camp out, watch this video from foureyedlaagan.

Mount Naupa is one of the known destinations to trekkers nowadays. Mt Naupa stands at 584 MASL that is located at Barangay Cogon, City of Naga, Cebu. Mount Naupa is situated south approximately 22 Kilometers away from Cebu City next to Minglanilla.

Mount Naupa is famous for its almost perfect cone-shaped peak with the picturesque green meadow panoramic scene. Everyone couldn’t want more but to experience the serene beauty of the place surrounding it with the 360 view at its peak. If you’re lucky, you can witness a sea of clouds early on the morning.

So why is Mount Naupa a perfect mountain for beginners that would like to start or try trekking activity?

Wandering soul scamper listed his personal reasons why Mount Naupa can be one of the best mountains to try for the aspiring trekkers who wanted to have a taste what mountain trekking and camping.

Mount Naupa is very accessible. It is accessible via Tungkop Minglanilla or in Lanas, Naga. Though the trek time via Lanas can take more than an hour compared to the other entry point. When going to Mount Naupa via Tungkop, Minglanilla, youcan hire a motorcycle taxi (habal2x) to haul you to the jump off at Sto. Niño Chapel at Barangay Cogon, Naga. There is a number of motorcycle taxi’s so transportation is not a problem unless you are going with a large group.

Trail difficulty is relative. Difficulty should not be defined per mountain as each of them is different from each other but for baselining and benchmarking purposes, few may rate the difficulty level of the trail to have a relative comparison and sort of heads up what to expect ahead.

Mount Naupa has relatively an easy trail. It has a trail difficulty of 1/9. Meaning it is one among mountains with the easiest trails. Its trail class is just class 1-2, meaning it is just an established path and no rocky parts and less or no obstacles at all. It sounds too easy right? It’s just like a walk in the park though. 🙂

Mount Naupa has a vast space for camp site. It can really accommodate roughly about a hundred tents. For beginners, no need to fret for not having the equipment for camping comfort as the ground is mostly flat and covered with grasses. Technically, pitching a tent is a no sweat as the ground is not rocky so fixing the pegs is as easy as 1,2,3.

Wandering Soul Scamper does not recommend setting up camp at the peak of Mount Naupa, even id no one prohibits it. This is to give way to other campers a chance to enjoy the picturesque view at the top without the cluttered view of the tents.

It’s a common reason for beginners that they don’t have that durable shelter (tent) that is why they won’t try camping yet after the trek. Mount Naupa is the solution because you can have your day trek in this mountain! Although there are few mountains within the city that anyone can have day treks too like Mt Kan-irag in Sirao and Mount Babag, but considering the trail difficulty for those mountains, it would not be a wise decision to have those mountains be their first mountain to trek.

Since the trekking hours to climb Mount Naupa is just around 30 minutes to one hour, then anyone can just do day trekking. There are some who will be going there at early dawn just to catch the sunrise.

Since Mount Naupa is not that high in terms of altitude or elevation, it has a fairly so-so weather and temperature. It can be a bit colder at night but it’s really bearable even without those thick jackets and sleeping bags. Sometimes during summer, the temperature can be really hot and humid too, just like the weather in the city. Beginners need not worry about the extremes in terms of weather when trekking or camping at Mount Naupa.

So there, these are the list that made Mount Naupa a conducive mountain for first timers on trekking. One thing to look after too as a bonus on camping at Mount Naupa is the sea of clouds during early mornings – that is if you are lucky enough that the clouds would cooperate. 🙂

Do you have a specific mountain in your mind that could be a good one for beginners? Of if you’re not a beginner, where did you start your trekking? How was the experience? Share your thoughts in the comment box below.

16 thoughts on “6 Reasons why Mount Naupa is for beginners”