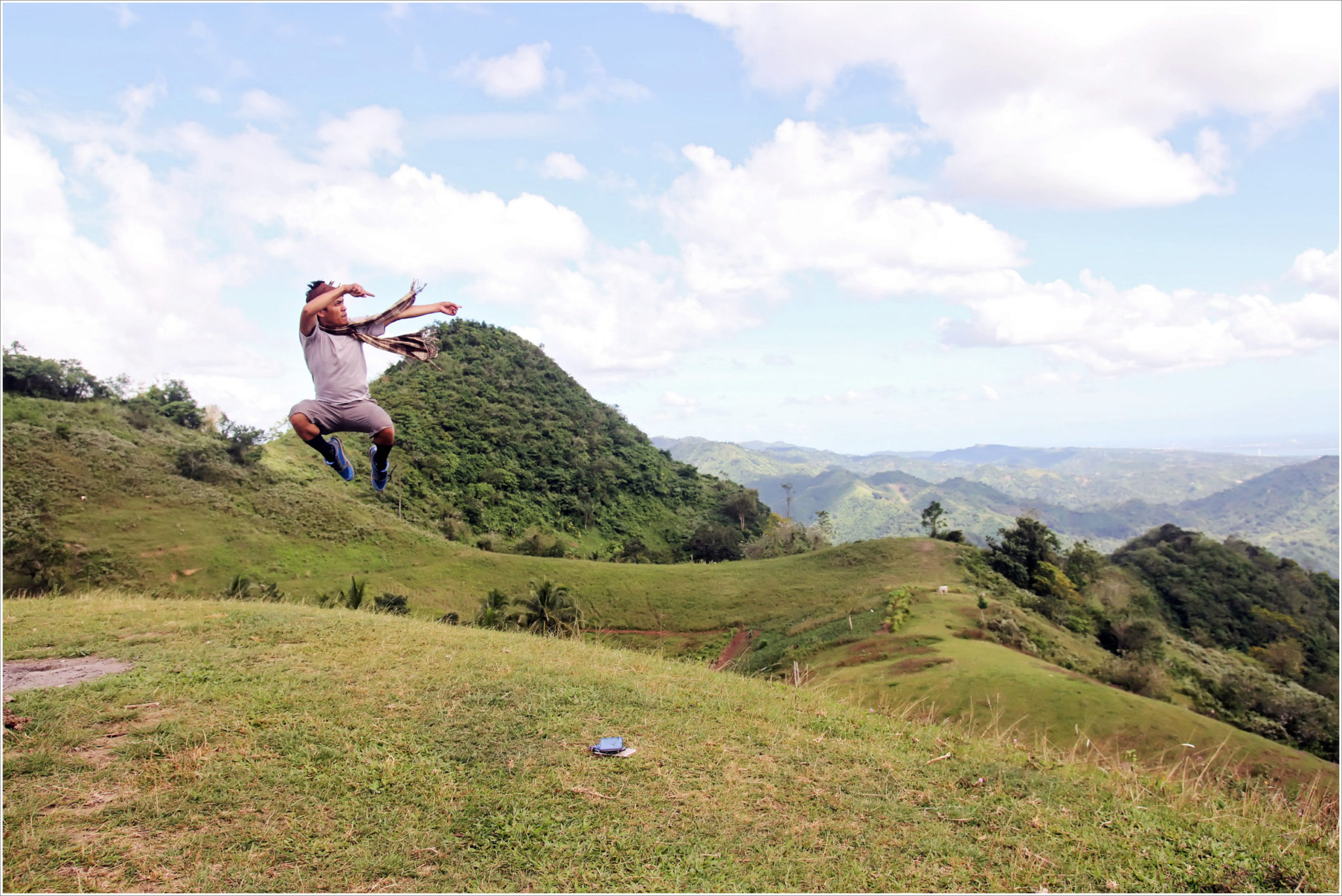 Mount Naupa has been known as one of the destinations to trekkers nowadays. Mt Naupa stands at 584 MASL that is located at Barangay Cogon, City of Naga, Cebu. Naga is situated south approximately 22 Kilometers away from Cebu City next to Minglanilla.

Mount Naupa has been known for its picturesque green meadow panoramic scene and I couldn’t want more but to experience the serene beauty of the place surrounding it with the 360 view at its peak.

So on the night of December 28, 2015 we had a quick plan to trek at Mount Naupa on the 30th and 31st but the plan was moved earlier to 29th – 30th instead. With almost no sleep at all, me Eddu and Anne couldn’t say no to adventure even if it means just the 3 of us who are going to trek and camp there.

We agreed to meet at Gaisano Fiesta Mall Tabunok at 2PM. But due to time constraints going there from the city, I was not able to have my lunch beforehand and them too. We had our late lunch there and after buying some stuffs we headed directly to Gaisano Minglanilla instead at the Tinong’s bakery at the Corner going to Tungkop by which most motorbikes hauling passengers to the jump off at Sto Niño Chapel can be found. We chose to stop at Gaisano Minglanilla because the taxi driver didn’t know where is the Corner going to Tungkop and so do we. Actually, I am not really sure that I can remember where exactly the place is even though I have lived for few years at Tuyan Naga until 6 years ago. (Poor me).

Anyways, we arrived at Gaisano Minglanilla past 5PM due to heavy traffic. Some motorbike drivers immediately asked us if were going to Mount Naupa due to our bags and get up I think. They offered 100 pesos / pax but it’s obviously overpriced fare and we managed to haggle just down to 75 pesos / pax. We can’t haggle that much and our choices were limited as it was very late in the afternoon already and the travel time is about 30 – 45 minutes to the jump off plus the 30-45 minutes trek to the camp site, there’s one thing for sure ahead of us – we will arrive at the peak at nightfall.

The road is concrete until passing through Barangay Cantao-an where previous factories like KSS, Kyocera and other medium sized companies were once operated. Upon exiting the gate of the compound, upon reaching the junction where the Cantao-an road and Guindarohan roads met, it will be a bumpy ride as the road can be rough on some parts towards Barangay Cogon.

We arrived at the Chapel at almost 6PM. Technically we didn’t know the trail going to the peak so we hired those kids in there who offered guide services for a small amount of money. It was getting dark, so we better have someone who knew the trail.

The trail going to the peak is quite easy. It is a footpath but an established one. The trail just start right beside the chapel going uphill and into the thin bushes. Darkness started to fall while we started our trek. The first half of the trail is a rolling terrain of mild ascent and descent going to the dead river. The second half would be an uphill climb until reaching the peak.

Although the trail is quite easy, but I found myself grasping my breath on the second half of the trek. I outbalanced myself and almost fell on the steep trail near the bamboos as we go uphill. I can endure long treks but at that time, I was sweating a lot and my body was getting weaker, maybe it was because I don’t have sleep the night before and I was not really having good night rest the entire week.

We then chose to setup camp at the peak since there were no other campers at that time, only the 3 of us. Furthermore, we paid the two kids with 150 pesos (75 pesos each) and they went back to their homes.

The Spooky Night at Mount Naupa:

We then climbed to the peak after resting for about 20 minutes in the shoulder. Good thing was the moon started to brighten the dark night. We setup camp, and had our dinner under the moonlight with the 360 view of the place. The view was simply amazing! After dinner, we had our stargazing session, chikka time and picture taking on the beautiful moon, stars and city lights.

The wind was so chilly at around 10 PM wherein we brought with us our sleeping bags outside but it came to the point where it was getting really cold outside that prompted us to went inside our shelter and have card games instead. We played games like “41”, “ungoy2x”, “karga buro”, etc. We played 41 the longest until such time when the moon was just right above us and it was past 12 Midnight, when the dogs gather at the peak near our tents and started to growl “Awwwwoooooo”. One of the doors of my tent where we are playing was open, so Anne immediately closed the vestibule door. I can notice that they are a bit frightened by the growling of the dogs around our tents, with which we can feel like someone is out there anyhow. The growling went stronger and they seemed really worried about it even if they tried not to show it.

No matter how I tried to let the dogs stop the growling but its of no use. Until I decided to went outside the tent and had a look if someone was really out there. They tried to stopped me when I started to open the door of my tent, but I was too quick in getting outside to catch what was it that the dogs growling at. Although I’m a bit afraid too, but I had no choice but to take a look outside and stop the dogs. When I looked outside, I only had seen like ‘shadows” of some sort but I won’t go into details for that as I may be wrong about it. At the blink of an eye, all that I saw was the beautiful surrounding under the bright moonlight. I then tried to let the dogs stop and tried to push them away from the camp site and they did. The dogs seemed following something, pushing away from our tents and were still growling but eventually they stopped upon reaching at the shoulder. It’s obvious that whatever it was they were trying to push away, it was for our own good. Thanks doggy!

Anne then told us that we won’t sleep until morning. It’s obvious she was afraid what I had just told them, as she was the only one in her tent as me and Eddu shared the same tent by the way. We teased Anne about it, and continued our games until 4AM. We then decided to have a quick rest after.

At around 45 minutes past 6 in the morning, there were trekkers outside our tents having their early morning trek. But since we lack some sleep, we were too lazy to come out despite them walking around our tents and seemed trying to wake us up by letting us know their presence. They then started to descent after few minutes of picture taking and we unknowingly had slept again until past 9AM. The sun is getting too hot that we need to open our tents. We rested a little while and had our breakfast at around 10AM. We break camp at around 11AM under the scorching sun, but thanks to the chilly winds again and the clouds  it was not that hot all the time. Also, we had our photo ops after breaking our camp, and we stayed at the peak until 12NN. 🙂

We started our descent back to the chapel (back trail) for just about 30 minutes. As we left the peak, there were a couple of trekkers who just arrived. We then heed back to Tabunok for our lunch. Ended our adventure with a sumptuous lunch at Hukad and went home past 5PM.

Overall, my Mount Naupa Experience is awesome because of all those things I mentioned above plus with the company of these 2 dear friends of mine. It was really a well spent adventure.It always will be when spent with equally amazing people!

How about you? Have you been to Mount Naupa? Do tell your experience by leaving a comment.

4 thoughts on “Mount Naupa : The Hidden Gem at City of Naga, Cebu”